It may be time to dust off those Second Amendment challenges to felon-in-possession prosecutions. In Binderup v. Attorney General United States, Nos. 14-4549 & 14-4550 (3d Cir. Sept. 7, 2016),  the Third Circuit granted as-applied Second Amendment challenges to 18 U.S.C. § 922(g)(1), holding that two challengers could not be forever prohibited from possessing firearms based on prior convictions for non-violent misdemeanors (punishable by more than one year’ imprisonment) that never resulted in any jail time.


Binderup was based on D.C. v. Heller, 554 U.S. 570 (2008) (establishing the personal right to possess firearms under the Second Amendment) in which the Supreme Court explained that firearms prohibitions like those for “felons and the mentally ill” were presumptively lawful regulatory measures. Id. at 627 n. 26 . In Binderup, the Third Circuit explained that because the lawfulness of a ban on possession of firearms by felons is just a presumption, this means the presumption can be rebutted. Slip op., at 28.
In granting the as-applied challenges, the court explained:
The Challengers’ isolated, decades-old, non-violent misdemeanors do not permit the inference that disarming people like them will promote the responsible use of firearms. Nor is there any evidence in the record to show why people like them remain potentially irresponsible after many years of apparently responsible behavior. Without more, there is not a substantial fit between the continuing disarmament of the Challengers and an important government interest. Thus, § 922(g)(1) is unconstitutional as applied to them.
Slip op., at 39. The court heard the case en banc, and the 184-page opinion was highly fractured.
Lyle Dennison explains that this is the first time a federal appeals court has granted a Second Amendment challenge when the person was plainly prohibited from possessing firearms under 18 U.S.C. § 922(g). He also explains that the Supreme Court has not taken an as-applied challenge under the Second Amendment post-Heller, leading to a possibility that this could be the case.
Importantly, a bloc of five judges in the majority concluded that 18 U.S.C. § 922(g)(1) is unconstitutional when used against anyone whose crime did not involve violence or any other signs that it was a serious offense. Thus, under this rationale, if a defendant does not have a prior violent crime in their past, then there is an argument that 18 U.S.C. § 922(g) cannot permanently prohibit the defendant from exercising their Second Amendment rights.
Posted by Carl Folsom at 5:00 PM No comments: 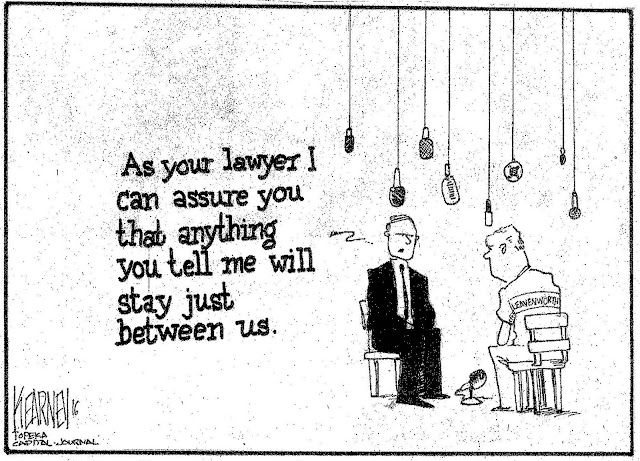 Links to orders and other papers from the ensuing litigation are now available at our website, along with our suggestions for protecting your attorney-client communications at all federal detention centers. This information will remain on our site for the foreseeable future, and we will update it as necessary. In the meantime, be vigilant.
Posted by Paige A. Nichols at 8:23 PM No comments:

Government's "protected discovery practices" under fire by the courts

Practitioners in Kansas City know the drill: The government conditions discovery on a promise not to give copies to the defendant, or on an agreement that defense counsel may only view the discovery in the government's office under strict conditions.

These days are coming to an end.

Earlier this summer, Tenth Circuit Judge Holmes, joined by Judge Kelley, issued a concurring opinion in an unpublished case to express "significant concern regarding the ethical or legal propriety" of conditioning discovery on an agreement not to give copies to the defendant.

And last week, Kansas District Court Judge Robinson granted a motion under both Rule 16 and a standard pretrial discovery order to compel the government to give defense counsel copies of videos of controlled buys from the defendant.

In United States v. Perez-Madrigal, defense counsel requested copies of these videos and was told, simply, "no." The government insisted that counsel would have to review the videos in the government's office, without his client present (at least "initially"). After hearing from the parties, Judge Robinson rejected all of the government's justifications (informant safety; evidence safekeeping) for not allowing counsel to have copies, and for excluding the defendant from counsel's initial review of the evidence.

Judge Robinson then went further, pointing out that the government's protected discovery practices "significantly interfere" with the defendant's Sixth Amendment right to prepare a defense; they "undermine[] the fostering of trust between a defendant and his attorney"; and they make it "difficult for counsel to provide effective prepresentation [with respect to plea bargaining], and for the Court to accept a defendant's plea knowing that it was made voluntarily and with knowledge of the factual basis for the plea." Finally, Judge Robinson emphasized that it is "not the responsibility or duty of the USMS" to transport defendants to the government's office to review discovery.

In the end, the Court rejected the government's practice of "applying protective discovery as a default rule to an entire genre of cases." If the government has good cause to restrict discovery in a particular case, it may request a protective order.
Posted by Paige A. Nichols at 4:18 PM No comments:

Email ThisBlogThis!Share to TwitterShare to FacebookShare to Pinterest
Labels: discovery

Earlier this summer, a panel of the Tenth Circuit declined a pro se defendant's invitation to overrule 10-year-old precedent reiterating that "the Confrontation Clause does not apply at sentencing," and holding that "Crawford does not require otherwise." The panel did not address the merits of the issue, but rather simply noted that one panel may not overrule another panel "absent en banc reconsideration or a superseding contrary opinion by the Supreme Court."

Does the issue have merit? The Sixth Amendment itself does not speak of confrontation as a trial-only right. And it appears to grant equal importance to confrontation and counsel---a right that we have long understood applies at sentencing:


In all criminal prosecutions, the accused shall enjoy the right . . .
. . . to be confronted with the witnesses against him;
. . . and to have the assistance of counsel for his defense.

The clauses are identically structured. So why the different treatment? The rule that confrontation is not a sentencing right can be traced back to a 1949 Supreme Court case that was decided in a world of jury trials and indeterminate sentencing. The sentencing landscape today is utterly different. As anyone who has worked in the 21st century criminal-justice system well knows, "[f]or most felony defendants, the adversarial process begins at sentencing."

That observation---made by Idaho College of Law Professor Shaakirrah R. Sanders---and the structure of the Sixth Amendment's text are at the heart of a new article by Sanders titled The Value of Confrontation as a Felony Sentencing Right. This article is your road map to claiming a confrontation right at sentencing. Read it. Use it. Win.
Posted by Paige A. Nichols at 9:27 AM No comments: