Today we will focus more closely on two types of predicate offenses: (1) force-clause offenses, and (2) enumerated offenses. The career-offender guideline contains both. It defines "crimes of violence" that trigger the guideline as "any offense under federal or state law, punishable by imprisonment for a term exceeding one year, that—

(1) has as an element the use, attempted use, or threatened use of physical force against the person of another, or

(2) is burglary of a dwelling, arson, or extortion, involves use of explosives, or otherwise involves conduct that presents a serious potential risk of physical injury to another."

When asking whether a prior conviction matches a predicate offense, courts will compare the prior’s elements either to (1) the elements of the force-clause, in which case the prior must contain an element of physical force (actual violence, either used, attempted, or threatened), against the person of another (force against property won’t do here); or to (2) the generic elements of an enumerated offense (more on generic elements later).

BUT LOOK OUT! The application notes to § 4B1.2 define "Crime of violence" to include "murder, manslaughter, kidnapping, aggravated assault, forcible sex offenses, robbery, arson, extortion, extortionate extension of credit, and burglary of a dwelling." § 4B1.2, comment. (n.1). The inclusion of these enumerated offenses in the commentary is not definitive. These "commentary offenses" will not trigger the career-offender guideline unless they either qualify as force-clause offenses under subsection (1), or are in fact listed as enumerated offenses in the guideline itself in subsection (2).

The Shell case provides a perfect example of this point. The question in Shell was whether a prior conviction for statutory rape qualified as a crime of violence for career-offender purposes. The Fourth Circuit held that it did not, despite the inclusion of "forcible sex offenses" in the list of commentary offenses. Even if the prior conviction might qualify as a "forcible sex offense," it did not qualify under the force-clause itself because it did not require "physical force against the person of another," and thus it could not be used to trigger the career-offender guideline: "§ 4B1.2 provides a separate two-part definition of crime of violence in its text, with the commentary serving only to amplify that definition, and any inconsistency between the two resolved in favor of the text." 789 F.3d at 345. See also United States v. Armijo, 651 F.3d 1226, 1236-37 (10th Cir. 2011) (prior conviction for reckless manslaughter did not trigger career-offender guideline despite inclusion of "manslaughter" in list of commentary offenses: "To read application note 1 as encompassing non-intentional crimes would render it utterly inconsistent with the language of § 4B1.2(a), which, as set out at length above, only applies to purposeful or intentional conduct.").

Bottom line: Don't let § 4B1.2's enumerated commentary offenses fool you or the court. Qualifying priors must still match the definition of "crime of violence" that appears within the guideline itself.

Posted by Paige A. Nichols at 4:41 PM No comments:

Email ThisBlogThis!Share to TwitterShare to FacebookShare to Pinterest
Labels: 4B1.2, Morass

Here's a Fifth Amendment quiz to start off your week:

Jose Delacruz was charged in state court with first-degree murder and aggravated robbery for his part in the beating death and robbery of a methamphetamine dealer. He was tried by a jury and acquitted of the murder but convicted of the robbery. Two months later, he was subpoenaed to testify at a codefendant's trial on similar charges. He refused, despite a state grant of use immunity, claiming that he feared federal prosecution. The United States Attorney had written him a letter stating that no federal prosecution of him would be forthcoming. But the letter also plainly stated that it did not constitute a formal grant of immunity. Did Mr. Delacruz have a valid Fifth Amendment claim?

Petitioners Neil Feinberg and others run a Colorado state-licensed marijuana dispensary. They are fighting the IRS in tax court over whether they can claim business-expense deductions for their dispensary. The IRS issued a discovery request seeking information about the exact nature of the dispensary. The petitioners refused, asserting their Fifth Amendment privilege. The IRS moved to compel a response, arguing that two consecutive Attorneys General have issued memoranda to field investigators in Colorado, instructing them not to prosecute state-licensed marijuana operations, and therefore the petitioners face no real threat of prosecution. Do the petitioners have a valid Fifth Amendment claim?

You can check your answers after the jump.

Restitution is a creature of statute, specifically the Mandatory Restitution to Victims Act at 18 U.S.C.§ 3663A. The statute requires that restitution either attend the offense of conviction or an agreement of the parties, and that the offense must be the direct and proximate cause of harm to the victim. "[T]he Government must show both that the defendant’s conduct is the ‘but-for’ cause of the individual’s harm and that the defendant ‘proximately’ caused the harm."

The court often orders monthly restitution payments as a condition of supervision. In that event, other means of collection, such as garnishment, cannot be contemporaneously pursued by the government. That is double dipping, as the Tenth Circuit recognized today in US v. Martinez: "The government can enforce a restitution order only in a manner that does not exceed the payment obligations set out in the restitution order." The court had ordered Mr. Martinez to pay $2.7 million in restitution, and to pay monthly installments of 25% of net disposable income. The government could only enforce the court's order, not collect by other means at the same time.

One other point from the Martinez opinion. The court's oral pronouncement conflicted with the written judgment. The oral order controlled. "When the oral and written orders conflict, as they do here, we look to the oral pronouncement."

Restitution in child porn cases is a different matter, and infinitely more difficult to appraise. Also a creature of statute, it has been complicated by the Supreme Court decision in Paroline v. United States, which orders the district court to award restitution in an amount somewhere between a "token" and "severe." The court must disaggregate the original harm to the victim based on the defendant's offense of conviction. U.S. v. Galan, 804 F.3d 1287 (9th Cir. 2015). The Tenth Circuit has been rather demanding "regarding the specificity required to reach a proximate cause determination." U.S. v. Benoit, 713 F.3d 1 (2013) (Benoit I); U.S. v. Dunn, 777 F.3d 1171 (2015) ("But the clear rationale of Paroline is that a defendant should be held accountable for the measure of losses that he individually has caused."). And the government cannot pursue collection during the period of supervision, except to enforce the court's restitution order. No double dipping.

Posted by Melody Brannon at 10:04 PM No comments:

Into the Morass: Predicate Schmedicate

Predicate offenses can trigger a variety of woes for our clients: mandatory minimum sentences, increased guideline sentences, detention hearings, and removal, to name some of the most common. These offenses generally fall into one of four categories: (1) force-clause offenses; (2) enumerated offenses; (3) drug offenses; and (4) residual-clause offenses. When analyzing a prior conviction (or current offense) to determine whether it can be categorized as a relevant predicate offense, it is important to note the precise predicate language of the statute or guideline at issue. And now that the residual clauses are off the table (or ought to be, even where they haven't yet been held unconstitutional), it's time to take a closer look at how the remaining categories of predicate offenses are defined.

The following chart tracks and compares the language of commonly invoked predicate offenses. It is now accessible in pdf format via the link on step one of our Analyzing Prior Convictions flowchart. Or simply click the pages of the below images to embiggen them here. 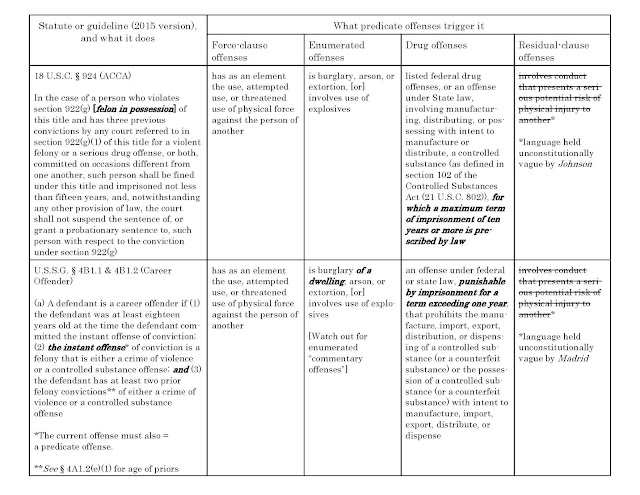 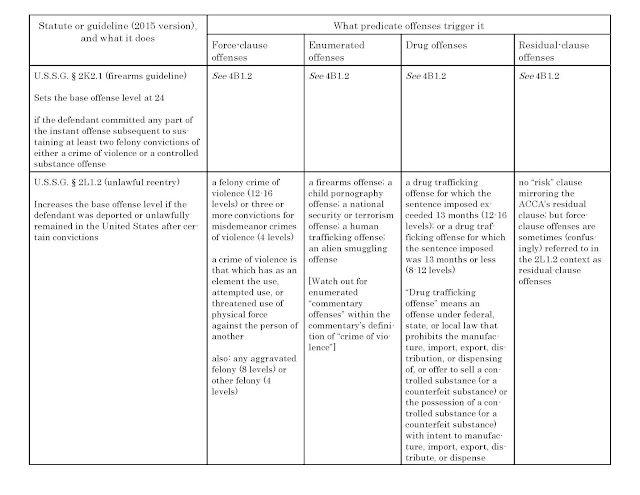 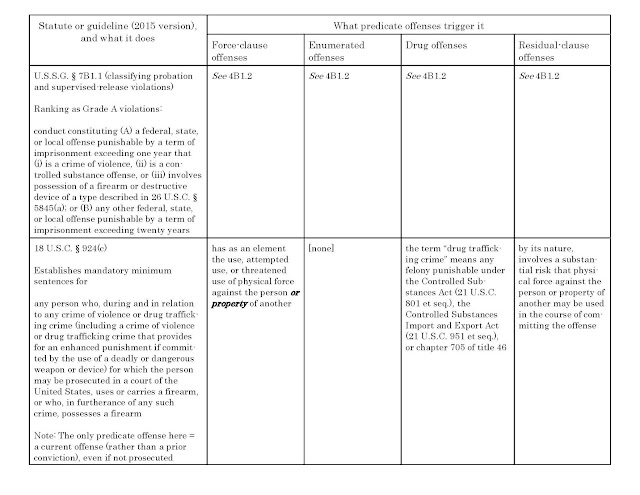 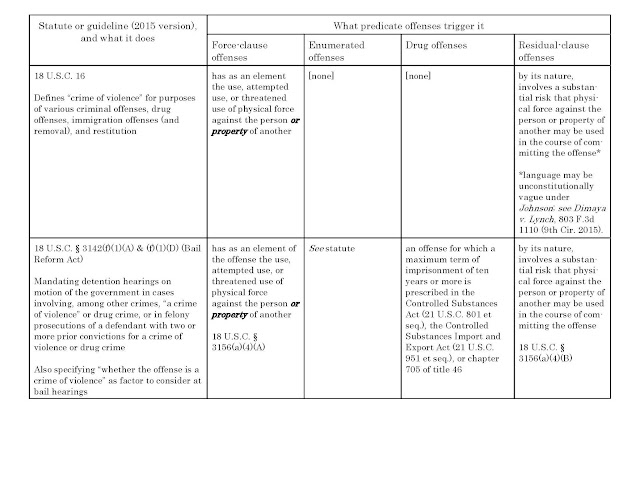 Posted by Paige A. Nichols at 6:00 PM No comments:

2000: "First of all, I want to say I didn't do it." Floyd Bledsoe, before being sentenced to life in prison for first-degree murder.

2015: "Going back to milking cows . . . something peaceful and quiet for a while." Floyd Bledsoe, in answer to a reporter's question about what he's going to do now that his 15-year-old murder conviction has finally been vacated.

And thus we are reminded, once again, that it happens: Innocent people are convicted. Wrongful convictions are affirmed. And sometimes it takes years---not to mention DNA tests and a guilty brother's confessional suicide note---before some semblance of justice is served.

Peace be with you indeed, Floyd Bledsoe.

Posted by Paige A. Nichols at 8:33 PM No comments:

Into the Morass: The Flowchart

Buckle your seatbelts, it's flowchart time! Here's how this is going to work: The below flowchart is now accessible (and, I promise, more legible) in pdf format via a link in the middle of the kansasfpd.org home page. The chart is designed to help you walk through the steps of determining when a client's prior conviction qualifies as a predicate crime. Over time, there will be links within each step of the flowchart taking you to a more detailed explanation of that analytical step. And yes, the linked materials will be bookmarked as well. Each time a new link is added, the content of the link will be discussed here as part of our "Into the Morass" series (though perhaps in an abbreviated form). Since this is a developing area of law, the content within the links may change over time. Use the flowchart online to be sure you have the most up-to-date version.

Today's featured links (which work on the pdf, but not on the image below) are merely to the title cases themselves, which are always worth another read. 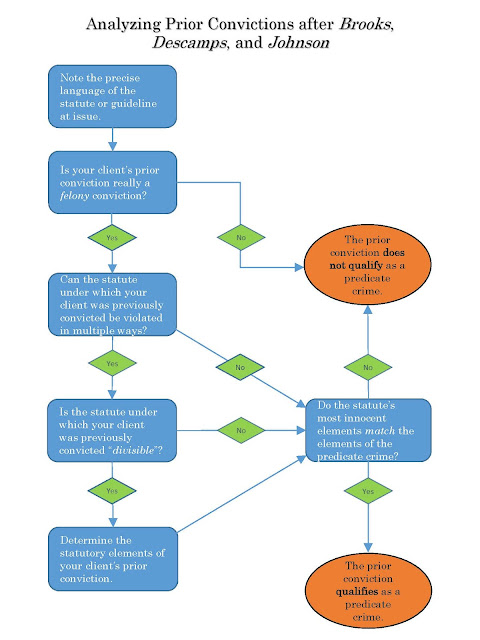 May the Flow be with you!

Posted by Paige A. Nichols at 6:59 PM No comments:

"Playing the role of a potted plant, defense counsel offered no objection"

Ho hum, another day, another guilty client, another plea hearing. May as well sleep through it---am I right?

Not on this Court's watch. If you think plea and sentencing hearings are no more attention-worthy than those pre-flight safety speeches we all tune out, the First Circuit wants you to think again. You certainly don't want to be at the receiving end of this appellate spanking:


Playing the role of a potted plant, defense counsel offered no objection throughout the proceedings, and then on appeal filed an Anders brief, which we rejected, ordering that the appeal proceed with counsel.

United States v. Figueroa-Ocasio, 805 F.3d 360, 367 (1st Cir. 2015). And guess what? The Circuit was right to demand counseled briefing. In fact, the plea colloquy and sentencing hearing were so flawed in this case of an ESL defendant who was "apparently and unwittingly telling the court that he was very likely not guilty of the charge, with no evidence to the contrary" that the Court ultimately reversed the defendant's convictions and sentence:


The district court in this case accepted the defendant's straight plea of guilty to firearms charges without taking all the steps necessary to determining that the plea was entered intelligently and knowingly. The district court also employed an erroneous illustration of the requisite mens rea in order to defuse the defendant's suggestion that he lacked the knowledge needed to support a conviction, thereby leaving us with a record in which it appears that a person pleaded guilty because he was misinformed about the elements of the crime. Finally, the district court also committed procedural error at sentencing by incorrectly calculating the applicable sentencing guideline range. We therefore vacate the conviction and the sentence and remand for proper consideration of the proposed plea and such further proceedings as are then called for.


So wake up and smell the colloquy! And if it stinks, appeal it.
Posted by Paige A. Nichols at 2:24 PM No comments: