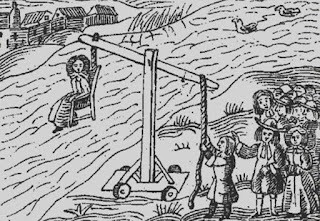 Your client is offered pretrial release, or diversion, or a chance to avoid revocation. All he or she must do is prove worthiness by complying with certain conditions for a certain period of time. What a deal!

Not necessarily. In a fascinating new article now available on SSRN or Westlaw, Yale Law School Clinical Professor Fiona Doherty compares these sorts of "testing periods"---during which the defendant has a chance to avoid prison by passing a test---to medieval trials by ordeal. While they are great opportunities for some defendants, they are traps for many others. 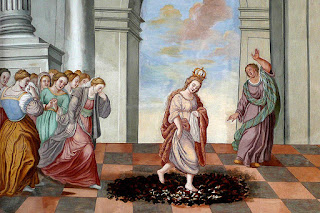 As Professor Doherty observes: "It turns out that defendants will accept nearly any arrangement as long as it provides them the opportunity to avoid going to prison. The possibility of avoiding prison is so strong an incentive for defendants that little else is required to counteract the scope of the concessions that judges and prosecutors have been able to demand from defendants in exchange . . . . [F]or defendants facing addiction, mental health issues, or disadvantaged social circumstances, the “test” may be stacked against them from the beginning. Given the high stakes, careful attention needs to be paid to the criteria that are being used in Testing Periods to sort defendants into the system's winners and losers."

Read this article and think about how defense counsel can encourage judges, prosecutors, and probation officers to impose more realistic tests, so that the defendant's gamble in accepting the challenge might actually pay off.
Posted by Paige A. Nichols at 5:30 PM No comments:

Attempts are not controlled substance offenses under USSG § 4B1.2

Prior drug convictions don't count as "controlled substance offenses" under USSG § 4B1.2 if they are attempt convictions. The reason is simple. The guideline itself (approved by Congress) does not mention attempts.

The Tenth Circuit disagrees. United States v. Chavez, 660 F.3d 1215 (10th Cir. 2011). But with Havis, we have a deeper circuit split and fresh hope that the Supreme Court will take up the issue and eventually rule in our clients' favor.

Object to your client's prior attempt conviction serving as the basis for a guidelines sentencing enhancement and preserve this issue for review today. If you are in the Tenth Circuit, note the Tenth Circuit's contrary authority. But argue that Havis is better reasoned, and that you are preserving the issue for further review.

Posted by Paige A. Nichols at 3:14 PM No comments:

Email ThisBlogThis!Share to TwitterShare to FacebookShare to Pinterest
Labels: 4B1.2, attempt

Racial dynamics, and the simple desire not to interact with police offer innocent explanations of flight

“[A] black man[] had the misfortune of deciding to avoid contact with the police. Following an anonymous tip that a black man was carrying a gun—which is not a criminal offense in Washington State—police spotted [the man], who was on foot, activated their lights, and pursued him by car . . . . [The man] reacted by running for about a block before the officers stopped him at gunpoint.”

There was no reasonable suspicion. The tip was anonymous and unreliable. There was no presumptively unlawful activity. And flight is not tantamount to guilt, especially given the innocent explanations for why a person "may reasonably flee from police."

Invoking Justice Stevens’s discussion on the outer limits of Wardlow, the Ninth Circuit emphasized that established "racial disparities in policing," "racial dynamics in our society," "along with a simple desire not to interact with police" offer "innocent" explanations of flight.

“Among some citizens, particularly minorities and those residing in high crime areas, there is [] the possibility that the fleeing person is entirely innocent, but, with or without justification, believes that contact with the police can itself be dangerous, apart from any criminal activity associated with the officer’s sudden presence.” Illinois v. Wardlow, 528 U.S. 119, 132 (2000) (Stevens, J., concurring in part and dissenting in part).

To support a reasonable-suspicion finding in Brown, the government presented “little more than a black man walking down the street . . . .”

Reversed and remanded.
Posted by Katie Stevenson at 1:04 PM No comments:

We've blogged before about the brain science suggesting that young adults (age 18-25) are not so adult after all, a fact the criminal law should take into account.

It turns out that similar brain science suggests that low-IQ adults of any age (IQ between 71 and 85) are likewise less culpable than higher-functioning adults. In a draft article available now via SSRN, author Adam Lamparello explains that low-IQ adults, like juveniles and young adults, struggle with impulse control and the ability to appreciate the consequences of their actions. They are also more likely than other adults to struggle with mental illness and substance abuse, as well as daily living.

If you have a low-IQ client who does not meet the criteria for intellectual disability, read this article and consider how your client's IQ may have contributed to your client's consent to search, inculpatory statements, or alleged criminal conduct. Challenge the government's proof of mens rea. Make a pitch for a lower sentence. And let us know how it turns out.

Posted by Paige A. Nichols at 8:05 PM No comments:

The constitutional duty to consult about an appeal: understanding when it arises, and what it entails.

In 2000, we learned in Flores-Ortega that counsel’s constitutional duty to “consult” with his client about an appeal is triggered when there is reason to think either (1) that a rational defendant would want to appeal (because there are nonfrivolous grounds to do so), or (2) that the particular defendant reasonably demonstrated to counsel that he was interested in appealing.

The Flores-Ortega court further defined counsel’s duty to “consult” as “advising the defendant about the advantages and disadvantages of taking an appeal, and making a reasonable effort to discover the defendant’s wishes.”

In February of this year, the Supreme Court reaffirmed in Garza v. Idaho that where counsel fails to consult with his client and thereby deprives the client of an appeal that he otherwise would have taken, prejudice is presumed. Importantly, Garza clarified that this presumption of prejudice holds true regardless of whether the defendant has signed an appeal waiver.

The First Circuit’s recent opinion in Rojas-Medina v. United States provides helpful guidance to defense counsel for understanding when the constitutional duty to “consult” with a client about an appeal may be triggered, and what exactly that duty entails—even when an appeal waiver is at play.

In Rojas-Medina, the defendant had pleaded guilty and signed an appeal waiver. The district court sentenced him to a term of imprisonment to run consecutive to any state sentence that may be imposed. The First Circuit reversed the district court’s dismissal of petitioner’s Section 2255 motion, holding that trial counsel’s failure to consult with the petitioner about an appeal deprived petitioner of an appeal he otherwise would have taken, and prejudice must therefore be presumed.

Some key takeaways from Rojas-Medina:

When the duty to “consult” arises

1.   A duty to “consult” arises, for example, when “a defendant who received consecutive sentences asked ‘about having time run together’ . . .  or when a defendant asked after sentencing ‘what next? What can we do now?’”

2.   The defendant’s inquiry as to why he received “so much time” and the possibility of filing a postconviction motion triggered counsel’s duty to “consult” with him about his right to appeal. (The defendant had “made it luminously clear that he was dissatisfied with the sentence imposed and interested in whatever relief might be available.”)

3.   When it comes to reasonably demonstrating an interest in an appeal, “[w]hat counts is the substance and thrust of what the defendant says to counsel”; the defendant is not required to use “magic words” to trigger counsel’s duty to advise him on his appellate rights.

What the duty to “consult” entails

1.   Counsel did not fulfill his duty of advising client on the pros and cons of taking an appeal by telling him “if he . . . thought there was anything that could be appealed . . . he had fourteen days” within which to inform counsel that he wanted to appeal. “Counsel’s duty to consult requires more than simply notice that an appeal is available or advice that an appeal may be unavailing.”

2.   Finally, Rojas-Medina reminds us that research is required to provide effective advice regarding the ramifications of an appeal waiver. In Rojas-Medina, the plea agreement did not make any recommendation as to whether the sentence should run concurrent or consecutive to any state sentence. And Circuit precedent established that the issue was beyond the reach of an appeal waiver. Trial counsel’s blanket assertion that an appeal waiver would prevent his client from an appeal not only fell below the constitutional duty to consult as outlined in Flores-Ortega, but also was blatantly wrong.

Rojas-Medina, and the Supreme Court’s opinion in Garza, are explicit reminders that counsel must know not only when we’re required to consult with our clients about an appeal, but also what a constitutionally-sufficient consultation entails.

And ideally, of course, we will be communicating with our clients about the wisdom and objectives of an appeal long before a sentence is pronounced—especially in a case where we are recommending the client agree to an appeal waiver for a strategic reason.
Posted by Katie Stevenson at 10:55 AM No comments: