Earlier this week, the Tenth Circuit held, in United States v. Bagley, that a protective sweep of a house in which police had no articulable suspicion that a dangerous person was inside violated the Fourth Amendment. 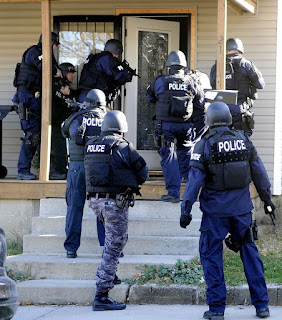 The Marshals had a warrant for Mr. Bagley's arrest. And they found him in a house. The only people they knew were in the house was Mr. Bagley, his girlfriend, and her children. The Marshals were able to get all of them out of the house without incident. But instead of simply arresting Mr. Bagley and bringing him in, the Marshals engaged in what they claimed was a protective sweep, which resulted in the discovery of two rounds of ammunition and some marijuana. They used that information to obtain a search warrant which resulted in the discovery of a gun.

The government claimed the Buie exception that allows a protective sweep applied to justify the initial discovery of ammo and marijuana. The Court rejected that argument, holding that a lack of knowledge if anyone is in the house does not suffice to support the required articulable suspicion of a dangerous person.
Posted by David Magariel at 11:24 PM