Does Stingray (cell-site simulator) use = a search?

A cell-site simulator poses as a cellphone tower and tricks a targeted cellphone into connecting with it instead of with a tower. Law enforcement officers might use a cell-site simulator to locate and track suspects associated with a particular cellphone. This is different from asking the phone company to disclose either real-time or historical cellphone data; this is direct government surveillance.

And that is why the D.C. Court of Appeals held last week that the use of a cell-site simulator to locate or track a suspect is a search for Fourth Amendment purposes, and ordinarily requires a warrant. The majority, concurring, and dissenting opinions of Jones v. United States are all well worth reading for a thorough examination of this issue, how it differs from other cellphone issues (such as the one before SCOTUS this term), and what other courts have held with respect to this and related issues.
Posted by Paige A. Nichols at 10:48 AM No comments:

First up on the October 2, 2017, oral argument docket is Sessions v. Dimaya. SCOTUS granted the government's cert request on this issue:


Whether 18 U.S.C. 16(b), as incorporated into the Immigration and Nationality Act’s provisions governing an alien’s removal from the United States, is unconstitutionally vague.

That is a short question with deep ramifications. Dimaya is an immigration case, but the statute at issue, 18 USC § 16, is the general definition of  "crime of violence" for the federal criminal code. Subsection (b) includes this definition: any felony that, by its nature, "involves a substantial risk that physical force against the person or property of another may be used in the course of committing the offense.”

For comparison,  remember Johnson v. United States, a 2015 SCOTUS case that held a similar definitional phrase unconstitutionally vague: a felony that "otherwise involves conduct that presents a serious potential risk of physical injury to another.” Johnson's invalidation of this residual clause of the Armed Career Criminal Act triggered an earthquake in retroactive litigation. Of course, that was reduced to tremors with Beckles, which refused to find the (essentially) same phrase vague in context of the sentencing guidelines. A favorable decision in Dimaya may cause the ground to shift again, or at least clarify the Court's vagueness doctrine.

Dimaya might sound familiar. Last term, this same case was styled Lynch v. Dimaya (oh, how much changed with that name). It was first argued January 17, 2017, but then SCOTUS set it for reargument on October 2, presumably because the Court had deadlocked at 4-4. It appears that Justice Gorsuch will be the tiebreaker.
-- Melody


Posted by Melody Brannon at 11:14 PM No comments:

Merely turning on a cell phone creates a record. That record, which can be vast as we all keep our cell phones turned on all the time, is stored by our cell phone providers. Do you have a privacy interest in those records? Or can the police just obtain your records to track your movements without your consent, without your knowledge, and without a warrant?

Those issues present SCOTUS with another opportunity to update Fourth Amendment law to fit with present-day technology. Carpenter v. United States asks if a warrant is required to obtain historical cell phone records that revealed the location and movement of a cell phone. This is framed as a doctrinal challenge to whether third parties--such as cell phone companies--may voluntarily share digital information information with law enforcement.

The facts, in brief, are that law enforcement obtained several months worth of historical cell phone records from Mr. Carpenter's cell phone service provider (the third party) without a warrant. This information tracked Mr. Carpenter's cell phone and placed him (or, at least, his cell phone) in the vicinity of a string of robberies. This data was created by merely carrying, not using, an active cell phone. The government did not have a warrant but relied on statutory authority derived from the Stored Communications Act of 1986. The government argues that the defendant has no ownership interest in records provided by the third party cellphone service provider, and there is no Fourth Amendment protection because the records do not reveal the content of his calls.

Carpenter argues that the volume and precision of the data calls for a different analysis than, say, bank records. A cell phone user has little knowledge or control over the information produced as a result of having a cell phone. The Electronic Frontier Foundation has filed an amicus brief that provides data on the breadth and depth of information provided by cell phones, cell cites, and cell towers.

This presents a different issue than either United States v. Jones, 132 S.Ct. 945 (2012) (tracking the movements of a defendant based on information provided by a GPS device attached to his car is a search under the Fourth Amendment and will generally require a warrant) or Riley v. California, 134 S.Ct. 2473 (2014) (officers must generally obtain a warrant before searching the content of a lawfully seized cell phone). Here the Court may find law enforcement's activities less intrusive than Jones or Riley; a lessened expectation of privacy would allow a third party to release the records without a warrant.

On the other hand, Professor Orin Kerr argues that the third-party argument is in the "wrong doctrinal box." Instead, he compares this to the eyewitness rule: "If the Supreme Court sticks with the eyewitness rule, Carpenter v. United States is an easy case. Cellphone companies are eyewitnesses." Either way, the Court needs to confront the Fourth Amendment question in contemporary terms.

Thanks to Scotusblog for the links.

-- Melody
Posted by Melody Brannon at 9:10 PM No comments:

Several decades ago, law enforcement agents perceived a rise in robberies at “stash houses” so they began to conduct “reverse sting” operations. The idea being that persons at a “stash houses” were particularly vulnerable to being robbed because they traded in cash and would be unwilling to involve law enforcement due to the illegal nature of activity at these houses. A “stash house” may sound like an official or menacing term, but it is simply law enforcement nomenclature for a place where items (drugs, cash, etc.) of the drug trade are kept.

Courts have long been suspicious of these types of sting operations. As the Tenth Circuit noted in Quinn v. Young, 780 F.3d 998, 1008 (10th Cir. 2015), “sting operations present unique questions relating to suspect culpability, particularly regarding the question of intent.” The Ninth Circuit boldly acknowledged the “troubling aspects” of a reverse sting designed “to find and arrest crews engaging in violent robberies of drug stash houses,” including “[t]he risk inherent in targeting ... a generalized population.” UnitedStates v. Black, 733 F.3d 294, 298 (9th Cir. 2013) ("The Black cases arise from a profoundly disturbing use of government power that directly imperils some of our most fundamental constitutional values.").

Empirical data showed that the “generalized population” most commonly targeted in these operations were racial minorities. But the rub for defense lawyers has been discovering any information about “selective prosecution” or “selective enforcement” by the government. That has been true because of two Supreme Court cases in particular that placed the hurdle higher than any particular defendant has been able to clear. In United States v. Armstrong, 517 U.S. 456 (1996) and United States v.Bass, 536 U.S. 862 (2002) (per curiam), the Supreme Court held that to obtain discovery, a defendant had the burden to present “some evidence” of discriminatory effect and discriminatory intent of the government action, and the defendant’s showing must be credible and cannot generally be satisfied with nationwide statistics.

Two weeks ago, the Third Circuit in United States v. Washington, No. 16-2795(Aug. 28, 2017) took on this standard, noting that “Armstrong/Bass has proven to be a demanding gatekeeper,” and that “the lived experience, … has resembled less a challenge and more a rout, as practical and logistical hurdles abound – especially proving a negative.” If you represent a defendant charged as a result of a stash house sting, Washington is worth your time to read.

Relying upon the logic of a Seventh Circuit opinion in United States v. Davis, 793 F.3d 712 (7th Cir. 2015), the Third Circuit noted in Washington the difference between law enforcement and prosecution. In other words, the decision a prosecutor may make about who to charge is different than the decision of law enforcement on who to target. In the latter instance, “there are likely to be no records of similarly situated individuals who were not arrested or investigated – would transform the functional impossibility of Armstrong/Bass into a complete impossibility.” The Third Circuit determined that motions for discovery seeking information on putative claims of unconstitutional selective enforcement are not governed by the strict application of the Armstrong/Bass framework. Rather, a defendant who raises a claim of selective law enforcement may rely upon a proffer that shows some evidence of discriminatory effect, including reliable statistical evidence, and need not show some evidence at the initial stage of discriminatory intent.

Washington thus relaxed the legal standard for defendants seeking discovery from law enforcement agencies. It is, of course, not binding law in this Circuit. And Tenth Circuit precedent may not be helpful to these claims. In 2006, the Tenth Circuit in United States v. Alcaraz-Arellano, 441 F.3d 1252 (10th Cir. 2006) found that to establish a discriminatory effect in a selective prosecution race case the claimant must show that similarly-situated individuals of a different race were not prosecuted,” and that “the elements are essentially the same for a selective enforcement claim.” But as the Third and Seventh Circuits have recently shown, the lived experiences of these stash house sting operations has been to foreclose any possibility that defendants can acquire the basic information in discovery to even raise the claim. In light of these cases, and Washington in particular, defense lawyers now have new authority to rely upon to aggressively seek discovery of discriminatory practices in stash house sting operations.

Posted by Melody Brannon at 9:10 PM No comments:

. . . and we sure are grateful. THANK YOU to our summer interns David (Stanford), Doretta (UMKC), Miranda (KU), Rachel (CUNY) and Will (Washburn)!


It was wonderful to have fresh ideas and energy in the office (not to mention on the Chaos Muppets kickball team!). We appreciate your persistence in chasing down authority and drafting (and redrafting) legal arguments and blogposts. Most of all, we love your curiosity about our work and concern for our clients.

A big THANK YOU as well to everyone in the community who contributed to the intern program: CJA counsel, judges, justices, and everyone else who took time to speak with the interns and open your office, courtroom, chambers, prison, or laboratory. We could not have provided such a well-rounded internship without you.

As for David, Doretta, Miranda, Rachel, and Will: We miss you already, and we can't wait to see what you do next! 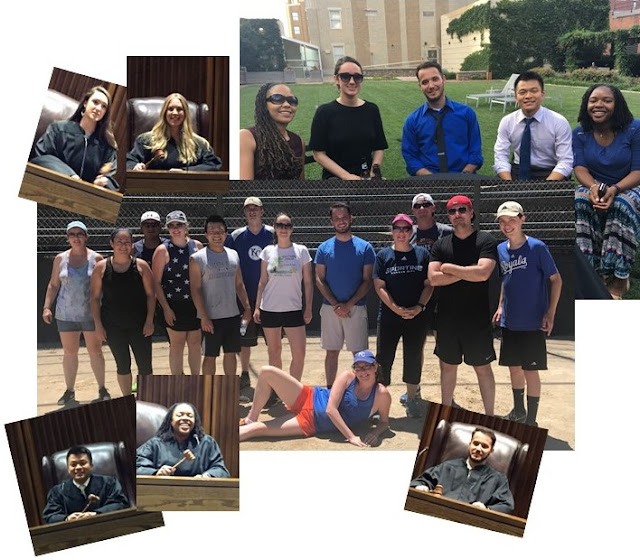 Posted by Paige A. Nichols at 4:34 PM No comments:

Email ThisBlogThis!Share to TwitterShare to FacebookShare to Pinterest
Labels: Interns

The new USSC Federal Sentencing Statistics Sourcebook is out with sentencing stats from 2016. The data wonks in the Kansas FPD are happily playing with the new numbers. Here are some highlights:

These statistics are helpful in many ways. Say, for example, you are asking for a BGV variance from 108 months in a firearms case. With USSC data, you can explain that the median sentence for a firearms case nationally is 51 months and the mean is 75 months (Table 13). The numbers are further granulated to specific criminal history categories (Table 14). This may inform the court where your requested sentence falls in relation to sentences imposed by other courts. By comparing the same statistics from other years, you can also track the trend of sentencing for a particular offense (see Figure L).

Posted by Melody Brannon at 6:39 PM No comments: