We can't stop blogging about this case......

A week a half back we blogged about a pretty crazy case where the Johnson County Sheriff got dressed up in full tactical gear to raid.....a family who was growing some tomatoes in their basement. Uh. Whoops. Sorry?

We would be remiss if we didn't mention another little gem buried in this 100 page opinion. The search warrant (besides the husband/father buying some gardening supplies for their tomatoes) was based on some green leafy vegetation (tea) "field testing" positive for marijuana. To say the Tenth Circuit was not impressed with the "field test" used in this case would be an understatement:

The field tests used by the JCSO, which are expressly identified by the manufacturer as a preliminary tool requiring laboratory confirmation, do not meet this standard of reliability. One study found a 70% false positive rate using this field test, with positive results obtained from substances including vanilla, peppermint, ginger, eucalyptus, cinnamon leaf, basil, thyme, lemon grass, lavender, organic oregano, organic spearmint, organic clove, patchouli, ginseng, a strip of newspaper, and even air. As demonstrated by this litigation, caffeine may now be added to that list. A 70% false positive rate obviously flunks the reliability test.

Yikes! Keep this language in mind for future cases. We all have cases where a field test is important in a warrant or to support further investigation. Remember this little gem when that issue rears its head in the future. 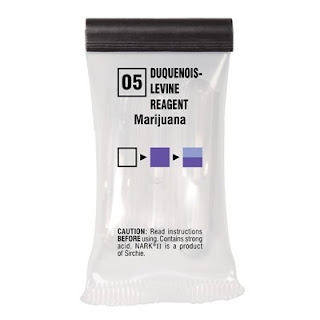