After taking a short break from blogging about forensic science we are back with a story that puts a prior concept we discussed directly into play. Week one of the forensic science blogging introduced the concepts of foundational validity and validity as applied. The news this week gave us a chance to discuss this topic in relation to a new science: rapid DNA testing.

Rapid DNA testing is what it sounds like. A DNA sample can be taken from a suspect and quickly run through a microwave sized machine. That test result can then be compared to CODIS - the combined DNA profile database run by the FBI. Supporters of expanding the testing point to giving law enforcement a tool to quickly determine if a suspect can be linked to prior unsolved crimes. 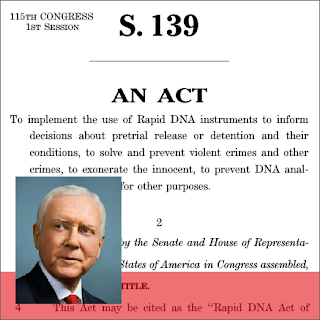 And this week, those supporters won the day. The Rapid DNA Act was signed into law. But there are concerns about the new law. First, there are a number of privacy concerns related to criminal defendants and those going through the immigration process. Second, this law would change the criteria for what DNA samples are permitted to be uploaded to the CODIS system. This change is summarized as:

But the problem with this change is the second criteria for admission discussed - validity as applied. Because DNA samples were previously submitted only through accredited crime labs, the risk related to contamination and error was reduced. The law requires the FBI to set standards for the administration of the program so today, we don't know the standards for submission. Depending on what the standards are, we could have a risk of officers doing the testing likely in a police department and without the supervision and regulations that a lab would have. Keep an eye out for what standards are set for these cases. And if you get a CODIS case use the discovery process to determine if rapid DNA testing was used and what safeguards were in place when the testing was done. If careful safeguards are not put in the place the credibility of the entire CODIS system is at risk.
Posted by David Magariel at 9:17 PM