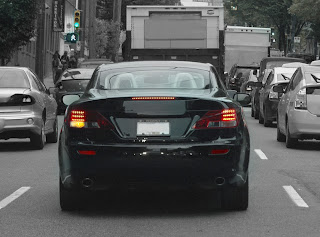 In United States v. Perez-Madrigal, the officer stopped the defendant for that exact reason. He claimed at suppression hearing that he had done the same thing in the past and since nobody objected he assumed it was fine. The government also claimed that the stop fell under the reasonable mistake-of-law doctrine. However, the government was unable to point to a case or statute that supported such a reasonable belief.

The government also claimed that the exclusionary rule should not apply in this context. Not so says the district court. The officer testified that he was trained that this type of stop was acceptable and had performed such a stop multiple times. So, if the exclusionary rule exists to deter officer conduct - "the societal benefits of deterring repeated instances of unlawful traffic stops outweigh the substantial social costs of suppressing the evidence seized as a result of the traffic stop."

Kudos to Branden Bell of the FPD for the suppression win. But the opinion also has some other, blog worthy issues in it. Stay tuned to find out what.....
Posted by David Magariel at 11:23 PM