"No one is actually being lugged off in cold irons bound."

Questions concerning sex offender registries figuratively ask where to draw lines. One main question is at what point do we finally draw the line and say registration is punishment? In the case of Michigan's registry, lines are also literally drawn. Under the Michigan law, offenders cannot live, work, or "loiter" within 1,000 feet of a school zone. For offenders in Grand Rapids, that is a severe restriction: 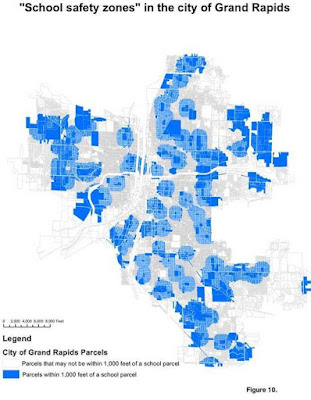 Based on that restriction, and a number of other factors, the Sixth Circuit held that the Michigan SORA law imposes punishment and is subject to the Ex Post Facto clause. The important factors are summarized by the court:


"A regulatory regime that severely restricts where people can live, work, and “loiter,” that categorizes them into tiers ostensibly corresponding to present dangerousness without any individualized assessment thereof, and that requires time-consuming and cumbersome in-person reporting, all supported by—at best—scant evidence that such restrictions serve the professed purpose of keeping Michigan communities safe, is something altogether different from and more troubling than Alaska’s first-generation registry law. SORA brands registrants as moral lepers solely on the basis of a prior conviction. It consigns them to years, if not a lifetime, of existence on the margins, not only of society, but often, as the record in this case makes painfully evident, from their own families, with whom, due to school zone restrictions, they may not even live. It directly regulates where registrants may go in their daily lives and compels them to interrupt those lives with great frequency in order to appear in person before law enforcement to report even minor changes to their information."

Obviously this is a Michigan registry and a Sixth Circuit case. It is still an important one because hopefully lines are being drawn as sex offender registries get more and more onerous on our clients. Also important in this decision is that an Ex Post Challenge was effective. While it has seemed like these challenges were dying on the vine, maybe there is still some room left.

Also important is that the Sixth Circuit put weight in the research that shows that maybe these registries aren't as effective as we thought/hoped they would be. It appears from the opinion that the government was not very effective at proving that they were. Good to see a court looking into the evidence to support such a registry.
Posted by David Magariel at 11:20 AM