Can't get expungement? How about a Certificate of Rehabilitation, instead?

You may recall our post last September about E.D.N.Y. Judge Gleeson exercising his equitable discretion to grant expungement so that a single mother with a 13-year-old conviction could find employment and support her children.

Judge Gleeson has once again shown his compassion for the convicted. But this time, it has taken the form of a Certificate of Rehabilitation---a form of relief from the consequences of a conviction that exists in many states, but not, until this week, in the federal courts.

As with Judge Gleeson's earlier expungement order, the order granting the certificate is rich with observations about collateral consequences and justice reform. Ultimately, the judge urges Congress to authorize a "robust federal certification system."* In the meantime, he issued the following certificate to "Jane Doe," a former defendant in his court (click to embiggen): 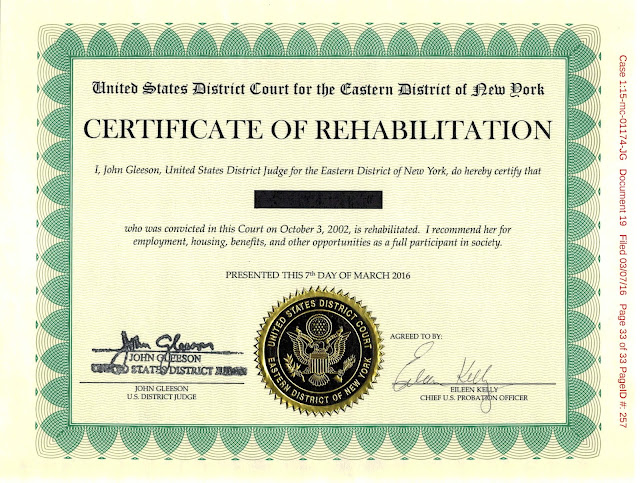 Also worth a read is the amicus brief filed in support of Jane Doe, proposing options for granting Doe relief, including both a writ of audita querela, and a recommendation for presidential pardon.
*As the judge points out, the Federal Rules of Evidence already contemplate certificates of rehabilitation. See Fed. R. Evid. 609(c) ("Evidence of a conviction is not admissible if: (1) the conviction has been the subject of a pardon, annulment, certificate of rehabilitation, or other equivalent procedure based on a finding that the person has been rehabilitated.").
Posted by Paige A. Nichols at 9:27 PM

Email ThisBlogThis!Share to TwitterShare to FacebookShare to Pinterest
Labels: certificate of rehabilitation, expungement