The NAAUSA (National Association of Assistant United States Attorneys) just published a “white paper” on the internet. Over the course of fourteen pages and twenty-three footnotes (wow), the NAAUSA mounts a tepid defense of the federal drug war. Six “MYTH” debunkings are identified. We decapitalize “myth” because it would be annoying if we didn’t.

In 2015, it seems uncouth to just say things without evidence. We proceed in order.

(The italicized language is from NAAUSA).

Myth One: Our prison population is exploding because of the incarceration of recreational drug users or low-level drug offenders.

Fact: Our federal prison population is not exploding, and those who are serving prison sentences for drug crimes are incarcerated because of drug trafficking crimes, not recreational drug use.

Us: Have you read anyone who claims that the federal prison population is driven by recreational drug use? Right. But also . . . 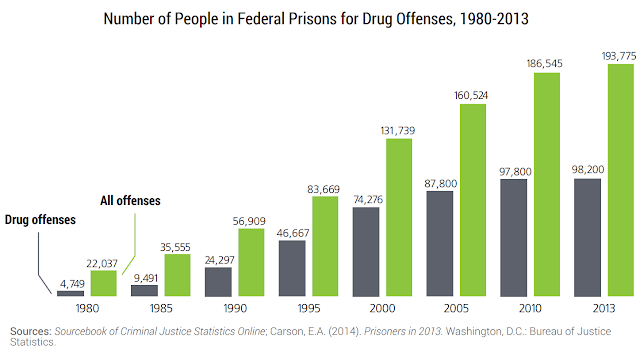 Myth Two: The federal prison population is a product of mandatory minimum sentences for drug traffickers.

Fact: The majority of drug traffickers sentenced in federal court are not being sentenced pursuant to mandatory minimum sentences.

Us: The federal prison population is driven by drug sentences. The fact that the guidelines are explicitly linked to mandatory minimums seems relevant. Drug dealers are only 33% of the people sentenced to federal prison, and 50% of the people who reside there. Because of the really long sentences for drug offenses.

Fact: It is well-established that drug trafficking is inherently violent and that all drug dealing is dangerous, taking the lives of thousands of Americans, destroying families, and undermining the moral fabric of our communities, regardless of whether any individual offender engages in an act of violence during the commission of a drug offense.

Us: The “white paper” continues with the claim that it “is well-established that drug trafficking is inherently violent... violent acts aren’t pretty: they range from beheadings to drive-by shootings” But
that’s not right.

-- Drug sentences were increased for,
--- 16.3% of offenders because the offense involved the possession of a weapon.

And that’s just weapon possession. Not actual violence. To be fair, there are no enhancement statistics for beheadings. Maybe there is a beheading epidemic that the guidelines miss. But it seems relevant that 83% of federal drug offenders didn’t possess any kind of weapon, presumably including machetes. Our point is not that drugs are good for society. It is rather that long drug sentences don’t reduce drug dealing. Drug sentences continue to skyrocket, but price and purity remain unaffected.

Posted by Melody Brannon at 9:15 PM